Two bodies A and B of masses 5 kg and 10 kg in contact with each other rest on a table against a rigid wall (Fig.). The coefficient of friction between the bodies and the table is 0.15. A force of 200 N is applied horizontally to A. What are (a) the reaction of the partition (b) the action-reaction forces between A and B? What happens when the wall is removed? Does the Solution to (b) change, when the bodies are in motion? Ignore the difference between μs and μk. 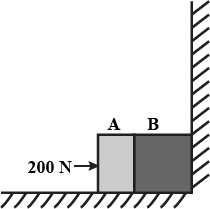 Coefficient of friction between the bodies and the table μs = 0.15

(a) The force of friction is given by the relation:

According to Newton’s third law, action and reaction are in the opposite direction

Therefore, the reaction of the partition will be 177.5 N, in the leftward direction

(b) Force of friction on mass A

An equal amount of reaction force will be applied on mass A by B, i.e., 192.5 N acting leftward

When the wall is removed, the two bodies move in the direction of the applied force

The equation of motion for the system of acceleration a, can be written as

Net force exerted by the mass A on mass B

Answered by Pragya Singh | 1 year ago

A thin circular loop of radius R rotates about its vertical diameter with an angular frequency ω.

A thin circular loop of radius R rotates about its vertical diameter with an angular frequency ω. Show that a small bead on the wire loop remains at its lowermost point for \( ω ≤\dfrac{\sqrt{g}}{R}\) . What is the angle made by the radius vector joining the centre to the bead with the vertically downward direction for \( ω =\dfrac{\sqrt{2g}}{R}\) ? Neglect friction.

A 70 kg man stands in contact against the inner wall of a hollow cylindrical drum of radius 3 m rotating about its vertical axis with 200 rev/min. The coefficient of friction between the wall and his clothing is 0.15. What is the minimum rotational speed of the cylinder to enable the man to remain stuck to the wall (without falling) when the floor is suddenly removed?

You may have seen in a circus a motorcyclist driving in vertical loops inside a ‘death well’ (a hollow spherical chamber with holes, so the spectators can watch from outside). Explain clearly why the motorcyclist does not drop down when he is at the uppermost point, with no support from below. What is the minimum speed required at the uppermost position to perform a vertical loop if the radius of the chamber is 25 m?

A disc revolves with a speed of \(33 \dfrac{1}{3}\) rpm and has a radius of 15 cm. Two coins are placed at 4 cm and 14 cm away from the centre of the record. If the coefficient of friction between the coins and record is 0.15, which of the coins will revolve with the record?

The rear side of a truck is open and a box of 40 kg mass is placed 5 m away from the open end as shown in Fig. The coefficient of friction between the box and the surface below it is 0.15. On a straight road, the truck starts from rest and accelerates with 2 ms-2. At what distance from the starting point does the box fall off the truck? (Ignore the size of the box).