Name two cell organelles that are double membrane-bound. What are the characteristics of these two organelles? State their functions and draw labeled diagrams of both.

Mitochondria and chloroplasts are the two double membranous organelles. They both are also called semi-autonomous organelles because they contain their own DNA molecules. They also have 70S types of ribosomes that are found in the cytoplasm.

(1) Mitochondria are rod-shaped structures and generally found in the cytoplasm of cells with other organelles.

(2) They are principally concerned with energy generation in the form of ATP by converting chemical energy.

(3) Mitochondria are surrounded by two membranes – outer and inner where the outer membrane covers the organelle. However, the inner membrane is folded and forms a layered structure. This layered structure contains several finger-like projections called cristae.

Functions of Mitochondria are:-

(1) Mitochondria are called the powerhouse of a cell because it generates ATP by cellular respiration.

(2) They provide energy in the form of ATP to perform all the important activities of living cells.

(3) They are regarded as semi-autonomous organelle because they have their own DNA and ribosomes.

(4) Citric acid cycle taking place in the matrix of mitochondria where it generates several metabolic intermediates. These intermediates are required for the  biosynthesis of various amino acids and proteins.

Characteristics of Chloroplast are:

(1) The Chloroplasts are also double membrane-bound organelles and are found all over the cytoplasm of plant cells.

(2) They contain chlorophyll that makes them appear green in color.

(4) There are a number of organized flattened membranous sacs called the thylakoids present in the stroma.

(5) These thylakoids are stacked one over the other to form a granum that looks like a stack of coins.

(6) Apart from this, there are flat membranous tubules called the stroma lamellae. They connect the thylakoids of the different grana.

Functions of Chloroplast are:

Chloroplasts are also known as the kitchen of the cell.

(1) They trap solar energy and utilize it for manufacturing food for plants. They are involved in the process of photosynthesis. 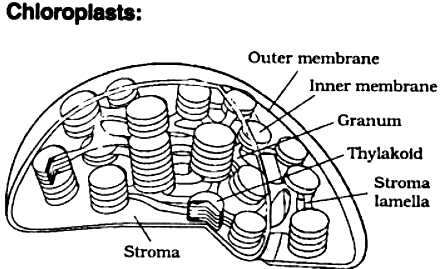 Answered by Pragya Singh | 11 months ago

What is a centromere? How does the position of the centromere form the basis of the classification of chromosomes?

Describe the structure of the following with the help of labeled diagrams.

Describe the structure of the following with the help of labeled diagrams.

What are nuclear pores? State their function.

What are nuclear pores? State their function.

Cells are the basic unit of life. Discuss in brief.

Cells are the basic unit of life. Discuss in brief.